Improving public safety is the proposal of the AllSeenEye algorithm, which seeks to recognize firearms through security cameras, issuing warnings to authorities and civilians about the location and type of weapon. It was created by startup Aiquimist in New York and developed by Brazilian programmer Nicholas Guimarães, 22.

“Whenever an act that puts people at risk happens to have a firearm involved. Why not develop a weapon recognition algorithm?” Asked Guimarães. Given this, the programmer created the public safety technology that can be used by governments, schools, airports, traffic and at train and subway stations. However, Aiquimist does not rule out using the algorithm in private companies such as banks, stadiums and shopping malls.

The algorithm also works together with social networks. In the case of attacks broadcast live over the internet, as occurred in New Zealand in March this year, warnings would be issued on the networks to stop the transmission immediately. In addition, the networks would send messages to people in the vicinity of the attack.

Aiquimist is a family startup. In it, Nicholas’s father and uncle, Eduardo Guimarães and Marcello Guimarães, work to develop solutions using artificial intelligence in various areas. “In any case, it is not a tool to hunt anyone. It is to detect and allow lives to be protected by a systematic check. It does not sleep and does not stop,” said Eduardo to say that the system would have constant surveillance and without the human presence. 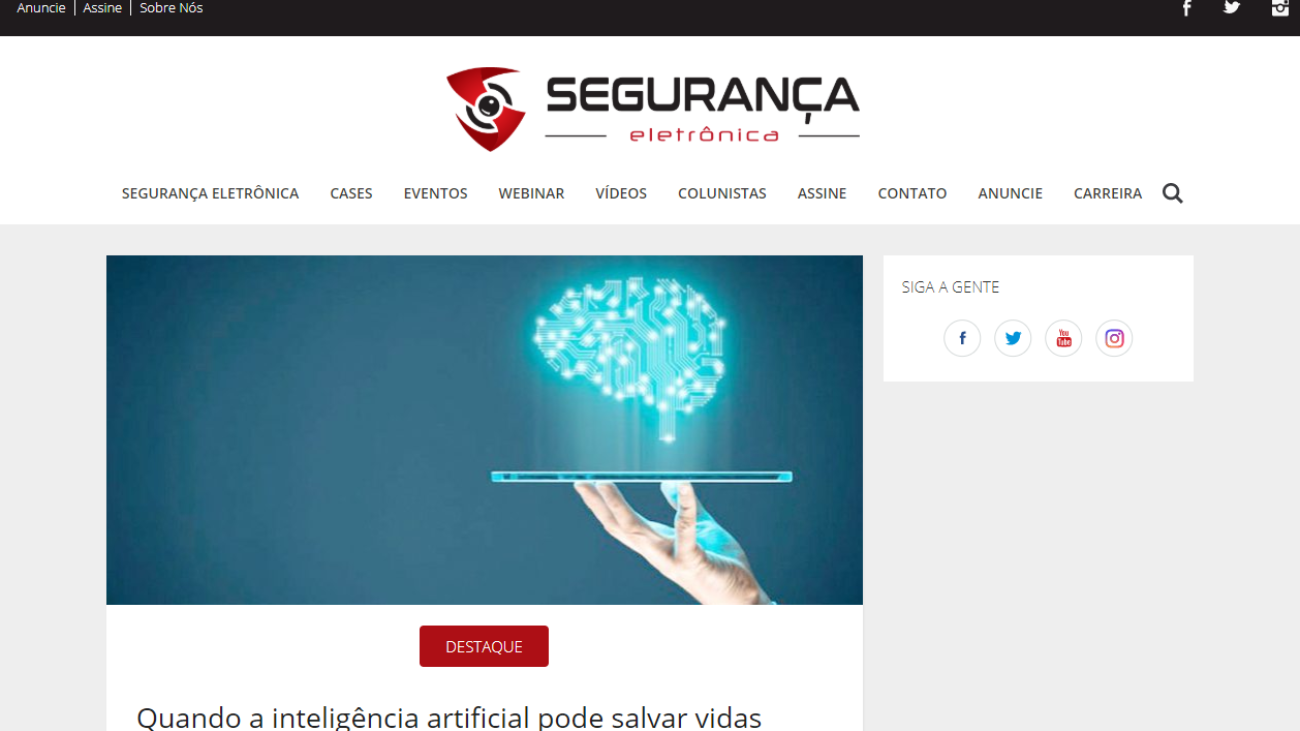 Imagine a technology that, connected to security cameras, can detect firearm possession in real time, issuing immediate alerts – to police and all types of users – about location and type of weaponry. Nicholas Guimarães, a 22-year-old Brazilian programmer, not only imagined but developed an artificial intelligence algorithm capable of this feat: called AllSeenEye, technology can minimize and even prevent the risk of loss of life in criminal and terrorist episodes.

The main name ahead of startup Aiquimist – the name refers to the noun Alchemy (alchemy) phonetic and makes a pun with the acronym AI (artificial intelligence). The company was founded in New York by Nicholas Guimaraes, Marcello Guimarães, 52, and Eduardo Guimarães, 51, respectively, the uncle and father of the young prodigy, with the goal of developing solutions using artificial intelligence in various areas. Started by developing smart systems for agricultural production – Marcello and Eduardo are managing partners of Mahogany Roraima, who was born into the position of the world’s fourth largest African mahogany producer.

Aiquimist paused in the development of a system to detect mahogany diseases. thanks to Nicholas’s idea of ​​focusing on the security area. He got it after learning about facial recognition systems developed by Chinese, Israelis and Russians and assessing that they can be “fooled” only by wearing glasses and a cap by those who don’t want to be recognized. “Whenever something that puts people at risk happens, there’s a firearm involved. Why not develop a weapon recognition algorithm? ”He asked, before putting “brains to work”.

The young man is responsible for developing and training the neural network that can identify short or long firearms (pistol, revolver, rifles) from security camera footage. According to Nicholas, the initial idea is that AllSeenEye technology will be used by governments, in schools, airports, train and bus stations or in traffic, for example. But private companies, such as bank agencies, stadiums, and malls, can also benefit from it. “This gun project is 100% for protecting people,” says the youngster.

The tool is capable of, for example, in the event of an attack being broadcast live over the internet [such as the one that occurred to two mosques in New Zealand in March. this year], issue a warning to social networks to stop streaming immediately. The networks could also issue alerts in the vicinity of the attack, so that people can move away from danger.

”In any case, it is not a tool to hunt anyone. It is to detect and allow lives to be protected from systematic verification. She does not sleep and does not stop, ”says Eduardo Guimarães, referring to the fact that the system would ensure constant verification, dispensing human attention on numerous cameras of the same system, 24 hours a day.

Simulating human-like intelligence through mechanisms or software is the basis of artificial intelligence, pointed by futurologists and scientists as the great bet of all markets for the very near future.

The Guimarães brothers predicted this long ago, so they started researching and working on this in 1992, having since developed some revolutionary programs. Nicholas grew up in this universe and revealed early on that he would follow in his father and uncle’s footsteps. At just 10 years old, for example, he was portrayed in a report on Globo’s Sunday program “Fantástico” as the child hacking his colleagues’ phones using bluetooth.

The young man soon discovered that he would have to be a self-taught to work with artificial intelligence. Because there is no specific faculty on this type of programming. “Today the Internet, thank God, is almost a university. Much of what I learn is from the net. Many courses are offered by major universities, such as MIT [Massachusetts Institute of Technology, where he took a Mathematics course] and Stanford, ”says the youngster.

On the startup’s official website (aiquimist.com) other projects can also be checked under development, such as the AllSeenEye SmartGlass, a goggle that allows the identification of criminals and suspects by face recognition. Already AllSeenEye Patrimony will be able to identify weapons, wanted persons and vehicles and send alerts via SMS or applications.